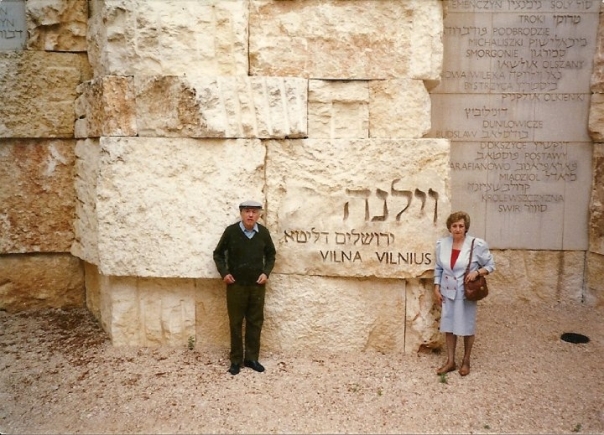 My parents in the Valley of Destroyed Communities, Yad Vashem

I can’t begin to tell you how many times I’ve been asked, “What’s it like to be the child of Holocaust survivors?”

The answer?  I don’t really know.  But, wow, do I have some stories!

My father was from the small town of Nyirbator in Hungary.  He was interned in the Mauthausen labor camp.  My mother came from the hustle and bustle of Vilna in Lithuania, and ended up in Bergen-Belsen.  My whole childhood was spent under the shadow of the Holocaust, but that was the childhood I knew.  I could only begin to compare it to a typical American childhood after I began visiting my friends’ houses and seeing that not every family has those horrific years coloring every moment of their lives.  Some days I envied them.

In the oh-so-many stories that I could tell, the one that came to mind recently was when I recently watched one of my daughters eating a bar of chocolate.  She bit into the bar, chewed it, swallowed it.  And then I heard my mother’s voice in my head, “She eats chocolate like a piece of bread!”  How many times did she say that to me while I was growing up?  I can’t begin to remember.  In my mother’s world, you did not take a bite, chew and swallow.  You placed a piece of chocolate in your mouth and let it sit there, letting it melt with the heat of your body, the heat of your thoughts, running down your throat.  Chocolate is meant to be enjoyed, not eaten as if it were a piece of bread. 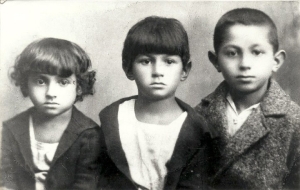 My mother on the left, with her sister and brother who didn't survive

My mother used to tell me Holocaust stories the way some parents tell their children fairy tales.  One story she touched upon often was how,from the time the Nazis invaded Vilna in 1939 until her liberation from Bergen-Belsen, she never had a piece of chocolate, until the 15th of April, 1945, a day she would celebrate more than any birthday or anniversary, when she said a British soldier came into the infirmary where she lay, and gave her a piece of chocolate.  She could have quickly scarfed it down, but she lay it on the back of her tongue and let its chocolately wonderfullness fill her mind and her body.

That story always stayed with me in the back of my mind, brought forth every now and again, usually when I hastily ate some chocolate, feeling guilty about the calories, feeling even more guilty that I wasn’t appreciating it, taking it for granted.  And then one day about nine years ago I was in the Recipezaar chat room.  A woman in New Zealand was asking me about my parents since she had just met a lovely woman with a number on her arm.  As I was explaining the number, another member called Dancer entered the chat room.  And the rest of the conversation went something like this:

Dancer:  What are we talking about today?

D:  Oh, my father helped liberate a camp during the war.  He was part of the Canadian army attached to the British army.

M:  My mother was in Bergen-Belsen, and she remembers her liberation date.  We celebrate it every year.

D:  It says here he was one of the first into the children’s infirmary.

M:  My mother was in the children’s infirmary when she was liberated.  She would always tell me the story of the British soldier who gave all the kids some chocolate, and how it was her first piece in over 6 years, and how much she enjoyed it.

D:  It says here my father gave each one of the kids a Hershey Bar…

Got your goosebumps yet?  I’m tearing up just writing about it.  Dancer’s father passed away in 1990, but she said he was the type of guy that would have just gotten on a plane and flown to New York to visit one of “his” kids.  Sadly, Dancer is no longer active on Recipezaar, and we’ve lost touch.  I would love to meet her one day, I owe that girl a Hershey Bar.

My mother always claimed I cook for the six million.  I do have a habit of cooking enough to feed everyone several times over.  She was the same way, always making sure we had enough to eat, because once upon a time she didn’t. Ju-Boy will back her up on this.  He gets very frustrated when we are 6 for supper, so I make enough for 20.  The other night we were 9 for dinner, so I made enough dessert for 18.

This is a dessert not meant to be eaten quickly, but savored, experienced, absorbed.  Don’t eat chocolate like bread!

Preheat the oven to 100 degrees C (200 degrees F).  Line two baking sheets with parchment paper.  You can trace circles on the paper using a teacup as your guide, but I usually don’t do this step.

Whip the whites until foamy.  Continue whipping and add the sugar, one teaspoon at a time.  Whip until stiff peaks are formed.

Using a pastry bag, pipe out a meringue nest, first forming the base, and then piping a wall up and around the base.  If you don’t have a pastry bag you can try this free form with a soup spoon, but it looks so much prettier with a pastry bag, so go and invest in one.

Bake in the oven for hour.  Then turn the oven off and let the meringue nests rest in there for another hour.  You can make these at night, then turn off the oven and go to bed, taking them out the next morning.  They should be hard and crispy on the outside, all gooey and marshmallowy on the inside.

At this point you can store the nests in a cool, dry place.

While the nests are resting, you can make the filling.

Beat the egg yolks and the sugar together.  Add in the cocoa and flour, and beat well.

Warms the milk and the cream in a saucepan over a medium flame.  Keep beating the egg yolk mixture and pour the warm milk/cream mixture in slowly, beating all the time.  Now pour everything back into the saucepan and constantly whisking, bring it to the boil.  When the mixture has thickened, take it off the flame and add the chocolate and vanilla.  Keep whisking until the chocolate melts.

Let the creme cool.  You can cover it with some plastic wrap over the top to keep a skin from forming, but I find that it doesn’t really form that much of a skin and what does “come up” can easily mixed back in without a trace.  Once cool you can store this in the fridge, but when you take it out mix it well so it gets all chocolaty and creamy all over again.

Spoon the creme patissiere into the meringue nests.  You can top with some strawberry slices, kiwi cubes, something tartish to cut the sweetness.

I sincerely apologize that I don’t have a picture of the finished product to show you.  I made these for the six million who came to us for Shabbat (okay, we really were only nine), and put the whole thing together right before the meal, and no photos were taken.