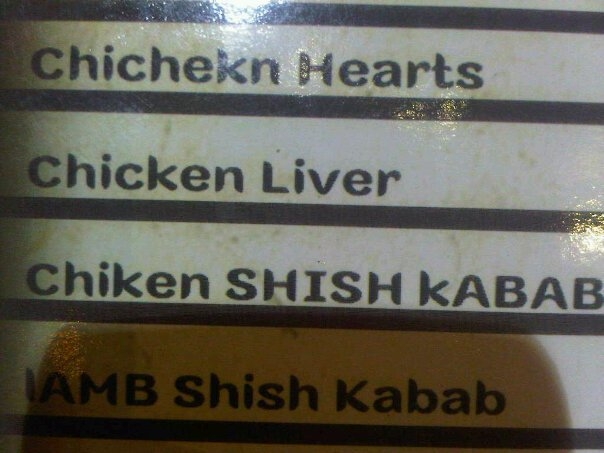 How many ways can you spell chicken?

If it can go wrong, it will.

Take the picture above, for example.  I was out with a bunch of hungry bloggers one evening and this was on the menu at the restaurant.  Since my friend Toby has a blog featuring jewels such as this one, I snapped a pic on my phone and sent it to her.  Now that I needed the picture for my own blog post, I couldn’t find it.  Luckily, I just hopped over to Toby’s blog and snatched it back.

I wish all of my life could be this easy.  But “man plans, God laughs” seems to be the theme song of my life.  Take last Friday night for example…

END_OF_DOCUMENT_TOKEN_TO_BE_REPLACED 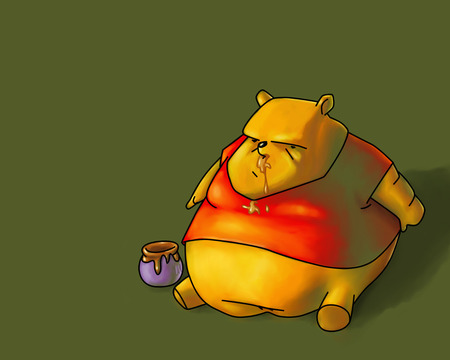 It’s been a slow summer for me.  I don’t do well in the humid heat of Ra’anana.  I feel sluggish, ponderous, as sticky as thick honey.  All that, and a bout of pneumonia last week, has left me full of ennui and it hasn’t helped the blogging much either.  I haven’t been in much of a mood to cook, or to write about cooking.  Pity this hasn’t extended to my appetite, that’s been as healthy as ever, in the most unhealthy of ways.

It took my friend Abby to get me out of my funk.  Well, not totally out of it, just to nudge me a bit.  She’s been asking me about Rosh Hashana menus.  I haven’t really thought about the holiday yet, I mean, it’s not Rosh Hashana until next year…

END_OF_DOCUMENT_TOKEN_TO_BE_REPLACED 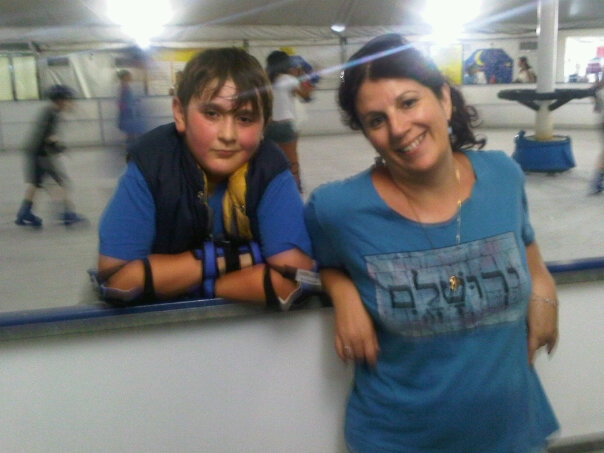 It’s Friday morning and I’m puttering around in the kitchen starting to cook for Shabbat.  Ju-Boy is off talking to God, Chip is snoring away after a late night out.  Didi would love to be snuggled deep in bed after a late night out, but she’s off early for her National Service gig.  I’ve got the kitchen all to myself, Barry White is on the stereo (you all should know, Barry is excellent for cooking, while The Boss is the best music for cleaning), when I hear a noise on the stairs.  Shy-Boy, despite the fact that he went to bed late last night after a marathon of X-Boxing, shuffles into the kitchen, helps himself to a bowl a cereal and utters the magic words, “Can I help?”

END_OF_DOCUMENT_TOKEN_TO_BE_REPLACED

The World Wide Web is a very interesting place.  You dip your tootsies into the deep waters of the Internet and you never know who is going to take a nibble.  You end up finding all sorts of people from your past.

I’ve reconnected with half of my sixth grade class.  I found the guy I had a crush on when I was 11.  I’m chatting with my long lost best friend from the playground.  People you think are always going to be part of your Once Upon A Time can become part of your Here And Now, and quite possibly part of your Happily Ever After.  For example, there was this guy I used to trade jokes with over the ether back in the 90s.  In 2005 we traded wedding rings.  Okay, so that one was a bit over the top.  Life isn’t always going to be so trippy. 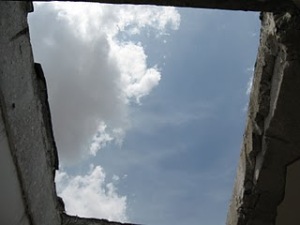 Sometimes you meet people over the net that you’ve never met in person.  I’d been reading Mrs. S.’s blog for a while, living through her personal angst as she renovated her house, then just taking a voyeristic peep into her family life, and finally learning a new language, Hebrish.    I’d comment here, comment there, but no connection was really forged until a certain Icelandic volcano forced Miriyummy to be born, and then the connection became two-way.  And then one day, Mrs. S. actually emailed me!

It seems we had another connection, one hanging by a thread, but a connection nonetheless.  It so happens that Mrs. S.’s mom and Ju-Boy used to work together once upon a time in the last century.  Mrs. S. never actually had the pleasure of meeting Ju-Boy in the flesh, but her family tells a story about him, and I quote (with permission, of course):

Sixteen years ago, before my sister’s wedding, my mother told her coworkers that the wedding was going to be starting on time and that they should plan accordingly.

[Ju-Boy] didn’t believe her.  He joked that EVERYONE claims that “we’re starting on time” but that no Israeli wedding ever does.  However, my mother insisted that this wedding would be different, and so they bet on it.  They determined what “on time” means and decided that the loser would have to give the winner a chocolate bar.

Anyway, as anyone who knows my parents could have guessed, but to the shock of those (like [Ju-Boy]) who had never attended one of our family’s smachot, the wedding was — of course — very much on time.

My mother didn’t come into work for the first few days after the wedding, but when she finally returned, she found a whole chain of mini chocolate bars covering her desk… 🙂

And in one of the most awkward segues in the history of this blog, that leads us to the recipe for this week — Chocolate Chicken.  Okay, let’s not all throw up at once.  It really isn’t Chocolate Chicken, but the recipe does have chocolate in it.  Mole (pronounce molay) sauce is common in Mexico and usually served over a variety of different foods.  I like to serve it over chicken.  The original Mexican recipe can have over 20 different ingredients and may or may not contain chocolate.  I like to add the chocolate since it gives the sauce a rich body, serves as a good talking point and supplies excellent shock value to your guests. 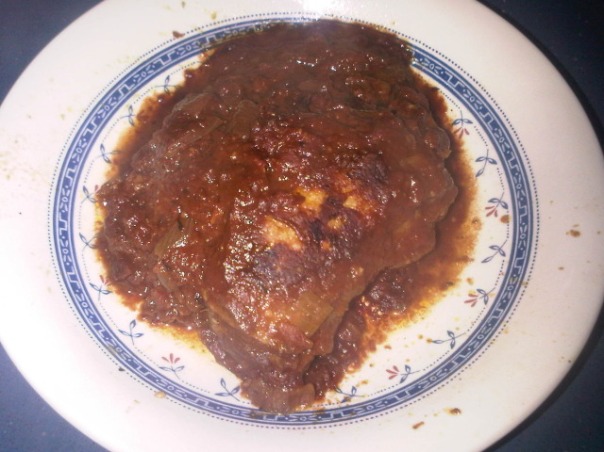 Discloure of ingedients is at your own risk 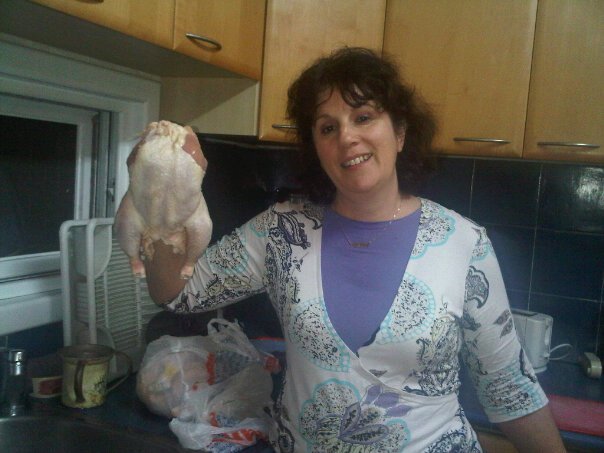 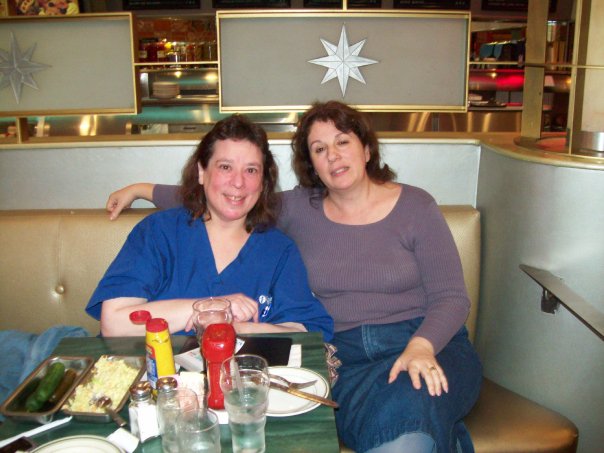 Age and Miriyummy -- November 2009 -- in my favorite trannie deli

Sometimes the most unlikely people make the best roommates.

I made aliya (immigrated to Israel) in 1983 with relative ease.  I was single, no household possessions to ship across the Atlantic, no children in tow and zero commitments.  I was “engaged to be engaged” (eventually marrying the guy, subsequently divorcing him 21 years later, but that’s another blog post, maybe).  Due to my unencumbered status the Powers That Be decided not to send me to a family-oriented absorpton center, but to a hostel for single olim (immigrants).

The hostel decided to place me with a religious roommate.  I was religious, she was religious, we should have gotten along beautifully, no?  No.  Anna was desperately Romanian, desperately incommunicative, desperately wanting to get married.  She had placed a singles ad in some Romanian newspaper and the phone calls were coming in fast and furious.  This would not have been a problem except for the fact that the only phone was three long flights down.  A bell would ring in our room and one would have to run downstairs.  Sometimes one would have to get dressed first.  Sometimes one was already asleep.  Can one see a pattern emerging?

Anna was a nurse who worked odd hours, usually evenings and nights.  The bell would ring, I would trudge down three flights of stairs, only to find that the call was for the ever-hopeful yet always absent Anna.  I always took a message, even the ones in garbled Romanian (no, I don’t speak Romanian).  One message from a Bucharesti lothario made it into Anna’s heart and she eventually went off to live happily ever after with the newfound love of her life.

So now I was roommate free and due for another one.  Age lived next door, and she had just had a huge fight with her roommate (also expertly chosen by the hostel staff for their ability to cohabit peacefully).  Rather then each of us wait for the next unsuitable roomie, we told the hostel we wanted to move in together.  We were told it was impossible, I was religious, Age was secular, we would never get along.  After all, they knew better.  So the next day we presented them with a fait accompli, and I moved my stuff in with her stuff.  We were two people who were total opposites and never should have been roommates.  Age was secular, I was religious.  Age was neat and tidy, I was a slob (still am).  Age liked the folk rock of the Sixties,  I liked the hard rock of the Seventies.  And yet it worked.  Except in the kitchen…

I keep kosher, Age doesn’t.  On paper and in practice it worked, 99.99% of the time.  I had my dishes, Age had hers.  We each had our own food on our own shelves in the fridge.  Everything was copacetic, until Age decided to make one of her favorite dishes, chicken with Parmesan cheese.  Those of you who know the rules of kashrut can hear the alarm bells ringing, can’t you.  Yes, she made this in her own pan.  Yes, she ate this off her own plate.  But the smell of it cooking… a lifetime of kosher conditioning had me running from the room at the smell!  Yes, we were a wonderful example of religious/secular harmony, until Age made her chicken.

In spite of this heinous chicken (sorry, Age), our friendship flourished.  Unfortunately, when Age immigrated to Israel she neglected to bring with her one of the most important things in her life, her family.  After a few years in Israel she returned to the States.  Even across the water we stayed friends (probably better friends now that I couldn’t smell her chicken cooking).  First we wrote chatty letters, then we started emailing.  Everytime I go back to the States for a visit Age will meet up with me, take my daughters shopping in Target, and we’ll share a meal at one of the many kosher restaurants in Queens.  When my mother died last fall Age was there at my side, helping me check into my hotel room, taking me into Queens for some stress-busting hot dog eating and junk food shopping.  She drove Ju-boy and me back to the airport, but not before stopping for a slice of pizza.  Age always did know how to relax me.  One day she’ll come back to Israel to visit and I hope I can give her a good a time as she always makes sure to give me. 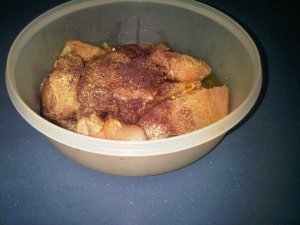 All the ingredients, pre-massage

I’ve been low-carbing it lately (prepare yourselves for a plethora of recipes in the coming weeks), and as I prepared some chicken breasts for the grill the other day I couldn’t help but think of Age and her Parmy chicken.  I can assure you this recipe has no Parmesan cheese.  In fact, it doesn’t have many ingredients at all, but it’s a good dish if you’re on a low-carb diet, and a good dish even if you’re not.  I like to make up a huge batch, place single servings in little sandwich bags, and freeze the lot of them, taking out a bag or two (or three) at a time for grilling, either stove-top or out on the charcoal.

This is a great recipe for OAMC -- once a month cooking