I’ve mentioned before that I can be a bit spontaneous.  Sometimes that’s not such a good trait.  Spontaneity can combust, and it will, and God will sit back and laugh.  For example…

Cara, one of my favorite friends, tried to fix me up with a friend of hers a mere 16 hours after I had just gotten divorced.  “Are you crazy?” I asked.  “I just got divorced yesterday!  YESTERDAY!  And I know this guy, he’s not my type, and besides, he lives all the way across the country, it would never work.”  I was determined to keep my impetuous nature in check, at least where Cara’s matchmaking was concerned.

It seems that Bachelor #1 was also not interested. I heard he told Cara that considering I really had just gotten divorced 18 hours before she called him, he wouldn’t, and I quote, “touch me with a barge pole.” 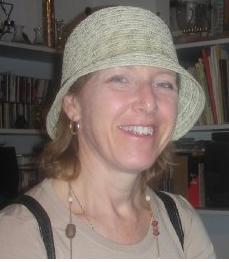 Ah, Cara, bless her cotton socks, as she likes to say (Brits really do say strange things).  She’s a sneaky little thing, my friend Cara.  A few weeks later she phones up single and fancy-free me to invite me over for a meal on Shabbat.  And guess who was there, without his barge pole?

We celebrated our fifth wedding anniversary last month.  At our wedding, under the chuppah, I could hear God chuckling away, and Cara sat there, looking so smug!

Yes, I stuck my tongue out at the photographer while under the chuppah...

One of the things Ju-boy had to get used to in Chapter Two is that he was now married to someone addicted to baking.  When I moved into his house he had no baking supplies whatsoever.  There was half a kilo of self-raising flour in his fridge, but I think that was a remnant of Chapter One.  I suppose he got custody of the flour.  I moved in and immediately stocked the kitchen with flour, yeast, baking powder, all things unfamiliar to this dedicated meat roaster.  A few weeks after the wedding we went to the supermarket together.  I noticed him in the ready-made cake section, holding up one of those marble loaves, and I rushed over, intending to slap the offending cake out of his hand.  What does he need that for?  He’s got me!  As I approached I saw him shaking his head, and heard him muttering to himself, “I never have to buy one of these things again!”  Doesn’t he say the sweetest things? 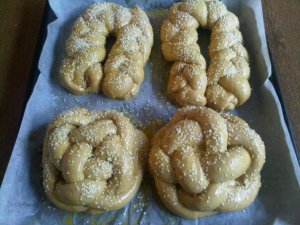 Painted and seeded and ready for the oven

Galit, over at Minnesota Mamaleh, talks about traditions in families.  One of the traditions I brought to my new household is home-baked challot, every Shabbat.  It’s one of the traditions that we’ve Brady-bunched, mixing some from my family, adding new ones from his, making this tradition now ours.  My challah recipe is an easy one to make, and easy to eat.  It has no eggs, but tastes rich and yummy, and I have a secret ingredient to making it taste special, which I share with you below.  Also, I use bread flour (Stybel #2 here in Israel).  I find it gives the challot a wonderful texture.  I have also made this recipe with plain white flour,100% whole wheat, half white/half whole wheat, and also using the 70 ww/30 flour available here in Israel at Nitzat HaDuvdevan.  Use what you prefer, but I get my best results, both in texture and taste with first the bread flour, then the 70 ww/30 mix.
Rich and Yummy Challah

While challah is delicious on Shabbat and on holidays, it’s also majorly yummy when allowed to go stale a bit, and then used in French toast. 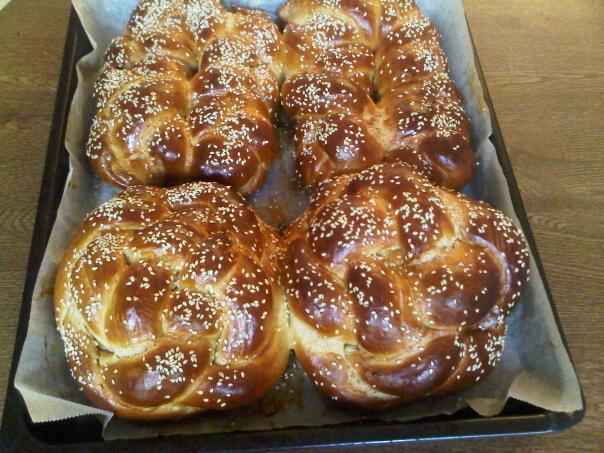 While challah is the cornerstone of Shabbat, I like how it’s managed to bind the family together as well.   Ju-boy and I actually started our Chapter Two over a loaf of challah at Cara’s house, may we continute to share many loaves together over the years to come.