← Don’t Pass Over These Recipes
Never Eat Chocolate Like Bread →

Before I start my discussion of the P word, the good and the bad of it, I just wanted to mention that yesterday was one year since Miriyummy came into being, all because Ju-Boy got trapped in England due to a volcano.  So if you love or hate my blog, you can all Blame It On The Volcano.

Happy Blogoversary to me!

Shmear some ketchup on some matzah, add some cheese, bung it in the oven and enjoy. My love affair with pizza began in the first grade.  My family had just moved to a new neighborhood and there was no school bus service.  One day half the school would come from my area, but in the first grade it was just me and the three Kluger kids.  I was a shnip of a 6 year old, and they were so much more mature and sophisticated at 8, 10 and 12.  Our parents got together and arranged that we would travel together on the New York city bus line from the Fordham Road area of the Bronx to the (then) sparsely-populated wilds of Co-Op City.

School finished at 3 PM, and before we boarded the #15 bus that would take us home, the three Kluger kids dragged me into the corner pizza shop.  They each bought a slice, and I was given a bite from each.  Heaven!  Nirvana!  And so began my relationship with pizza.

My mother didn’t really believe in pizza.  They didn’t serve pizza on the streets of Vilna when she was a kid.  My childhood pizza experiences were reduced to a bite of the Kluger slices, which ended two years later when there were enough kids living in Co-Op City and going to Kinneret Day School to warrant a school bus.  No more #15 bus home with a pizza stop along the way.  During the summers, up until I was 13, we would go up to the Catskill Mountains and join the rest of the Jewish population of New York in the various bungalow colonies that dotted Sullivan County.  Once a week or so the pizza guy would drive up to the parking lot and sell [almost] frozen pizza out of the back of his car.  They may have fallen off the back of a truck, they may have been breeding grounds for ebola sitting there in the summer sun, but my mother caved in to pressure and once a week I had some of that yummy Macabee pizza, oh yum!

When I was 18 I spent the year in Israel, and for a few short months lived in Jerusalem.  There was only one real pizza store (real pizza means New York style) and that was Richie’s Pizza on King George Street.  Guess who got a job slinging slices?  As a dedicated employee, we were allowed to eat eight slices a day on the company tab.  Everyone who worked there told me that after a few days I was going to be so sick of the sight and smell of pizza I would only manage a slice or two during my 9 hour shift.  They were so wrong, I never got sick of pizza.  And thankfully, at 18 I had a wonderful metabolism, and could manage to eat as much pizza as I liked without gaining a gram.  1981 was a good year for me pizza-wise.

We’re now right in the midst of the Passover holiday, and pizza crust is not on the menu.  Yes, I did mention before that you could make pretend pizza on a slice of matzah, but in my mind that’s sacrilegious.  For years I was reduced to going cold turkey, no pizza for a whole week.  I so hate Passover!

And then I married Ju-Boy, and guess what?  The guy can make some decent Passover pizza.  Okay, it’s not on the same gastronomic level that I used to churn out at Richie’sbut spiritually it fills a need in me.  And the fact that he makes it and serves it up to me on a plate with some salad on the side, and then even washes the dish, that just adds to the yumminess, for me at least.  If you want to experience this Passover pizza, go get your own Ju-Boy, mine’s busy! 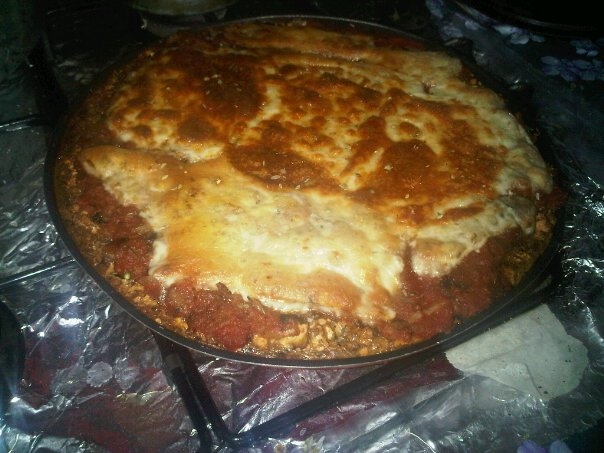 ← Don’t Pass Over These Recipes
Never Eat Chocolate Like Bread →