A Phoenix From The Ashes

Sassy on her school trip to Auschwitz

I am a classic second generation Holocaust survivor.

My third generation kids are unabashedly Jewish and unabashedly Israeli and I so wish my parents were around to see how I have raised my phoenixes out of the fires and ashes of the camps.

END_OF_DOCUMENT_TOKEN_TO_BE_REPLACED

Once upon time, about 26 and a bit years ago, the X told me we were having a guest for Shabbat.  “He’s Irish, he’s funny, you’ll like him.”  He was, he was, and I did.  He busted up my bathroom door, he practically flashed my neighbors (not on purpose) and spoke to me in that Lucky Charms leprechaun voice.  Shabbat was magically delicious!  I was eight months pregnant with Sassy at the time, and I laughed so hard that Shabbat I thought I would go into early labor. 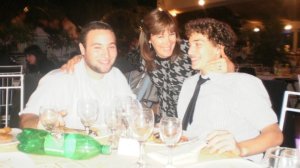 Irish Jonny went on to marry Aussie Vicki and over the years the family grew to include Awesome Eytan, Famous Seamus, Lambie Leah and the ever mischievous Bambi (their baby deer who’s growing some serious antlers, watch out girls). 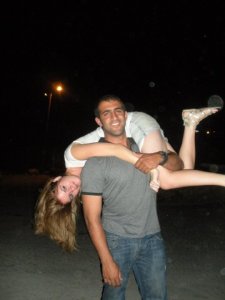 I met Jonny back in Chapter One, and now we flash forward to Chapter Two.  I’ve been firmly ensconced in Ra’anana for several years now.  Sassy and Nomush are grown and live elsewhere, Sassy with her Sabraman in London, Nomush in Jerusalem.  My baby, Didi, has found her niche here in Ra’anana, but my Tinky was at loose ends.  She lives in Jerusalem with the X, but tried to make it under my roof for a while.  When I first moved into the Ju-Boy household Tinky was in boarding school, so she never really lived with me here in R-Town.  After her year of National Service she moved in.  She fitted seamlessly into the family, found a job, but was unhappy.  Tinky is my party girl, a real social butterfly, and she missed her gaggle of friends in Jerusalem.  In my effort to rev up her Ra’anana social life I tried to find her some friends.  Bad move.  Sad move.  How embarrassing is it for your mother to find you some friends?  If my mom had tried that when I was 20 I would have left the country (wait a minute, I did that anyway…).  So Tinky returned to the hills of Jerusalem and her father’s house, where her favorite hang-outs are all within walking distance. 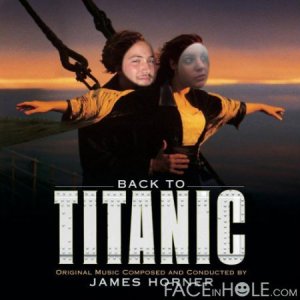 One Shabbat, when she came to visit us here in R-Town we invited Irish Jonny, Aussie Vicki and their hybrid crew over for a meal.  Famous Seamus is Tinky’s age, so I said, “He’s (part) Irish, he’s funny, you’ll like him.”  Much rolling of the eyes ensued, but this time Miriyummy planned and also got to laugh.  Tinky and Famous Seamus hit it off, and even though she no longer lives with us, she has a friend in Ra’anana.  They meet up every time she comes to visit and the house is filled with their laughter.

Famous Seamus is fond of my desserts, which I find very flattering since his mom is such an amazing cook.  I would sell my soul to the Devil for her Pavlova.  She’s Carine Goren with an Aussie accent.  A few weeks ago I was playing around with my usual brownie recipe, adding a bit of this and tossing in a bit of that.They were a hit with everyone, but they had no name.  How sad for them to be stuck in Brownie Limbo.  Then Famous Seamus came over one Shabbat to hang with Tinky, and the smile on his face and the disgusting sounds he made while inhaling these babies gave me the idea to name them after him.  See people, make my kids smile and you too can be immortalized in chocolate!

Lambs to the Daughter

Look at those curls! 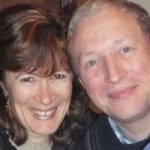 One of the best things about moving to Ra’anana is that not only did I get reacquainted with friends from the past (for instance, Karen from high school), but the second generation has kicked in, and my kids are now friends with their kids.  Way back in the day, before the second generation was even a twinkle in our eyes, Jonathan was a friend of The X.  He used to come over for Shabbat and abuse our bathroom.  A few years later he married Vicki, one of my favorite yummy mummies.  We didn’t see each other often as a couple, usually just at weddings and other celebrations.  But when I married Ju-boy and moved into his burb, Jonathan and Vicki were just down the street, and the friendship was renewed, and a stronger link was forged.  Jonathan is a loyal friend, and Vicki, well, Vicki is such an amazing cook she actually makes me think I have miles to go before I can keep up with her in the kitchen.  Her petite frame has some wonderful shoulders and she’s a great friend, always willing to let me rant and set me straight about life. 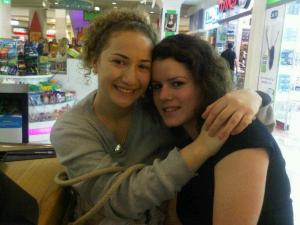 Leah and Didi hanging at the mall

Jonathan and Vicki’s son Shim-boy is friendly with my Tinky, but the closest bond is between my Didi and Leah.  They started out in high school together, went on to do their bagruyot (matric) studies together, and now that both are in National Service (Didi in Afula, Leah in Jerusalem), they try to meet up when both manage to get home on the same weekends.  They laugh together, fight, make up, go out for sushi and ice coffees (I hope not at the same time), and each one likes to raid the other one’s kitchen.  Didi, picky thing that she is, will willingly eat anything Vicki puts in front of her, and Leah is always ready to sample my baking experiments.

With such devotion to kitchen quality assurance, how could I not play around with some of Leah’s favorite ingredients and make a brownie in her honor.  Well, not exactly a brownie, with Leah’s tightly curled flaxen locks, it’s more of a blondie.  A lambie blondie.   A luscious lambie blondie.  A Luscious Lambie Leah (always alliterative, actually). 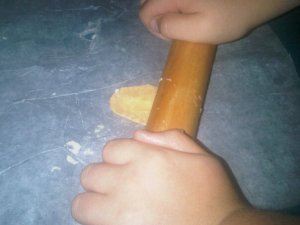 White chocolate, check.  Gooey caramel toffees, check.  Light brown sugar, check.  These luscious lambies are a combination of various ideas.  The blondies are based on the Butterscotch Blondies found in Bruce Weinstein’s The Ultimate Brownie Book.  The idea for the toffee filling comes from Carine Goren, my dessert diva.  You need to flatten the toffees (or caramel squares).  I made good use of Shy-boy.  I highly suggest everyone acquire a step-son interested in cooking for this task, a valuable piece of kitchen equipment.

When most people go abroad they usually like to visit the normal tourist attractions.  You know, famous city landmarks, museums, shopping, shopping, SHOPPING!!!!  Not me. Well, except for the shopping part, but not the kind of shopping you think.  I love supermarkets.  In New York, Zabar’s is my shrine. No kidding. With few exceptions, I have to go and spend time in Zabar’s every time I visit New York. It drives my kids crazy. They would rather spend hours and hours in Macy’s or some giant mall. I would rather have root canal than do that.

I love visiting supermarkets, and even more, love buying things that we don’t have back home. I once pulled up to the El Al security check at Kennedy airport with one whole suitcase with nothing in it but chocolate and Slim Fast products. And horrors of horrors, it looked weird on the x-ray machine so they opened it. The ex-elite combat unit security clerks looked at my stash and asked, “What are you going to do, first eat the all the chocolate and then use the Slim Fast?” Embarrassingly, yes!

When I was dating Ju-boy he told me he was going to visit his daughter Scarlet (as in the color, not O’Hara) on her air force base down south.  He mentioned that the last time he went down there for Parents’ Day he unknowingly came empty handed, while all around him families were hauling out what could pass for a full, six course Thanksgiving dinner.  But this time, he was dating a Nigella Lawson wannabe, and I was happy to suck up impress and sent along some brownies.  Instead of nuts or chocolate chips, I tossed in a bag of some of my self-imported Reese’s Peanut Butter Chips.  Ju-boy proudly handed over the brownies to daughter Scarlet, who put them away in her room to save for later.  But, alas (this should be read with your right forearm over your forehead in the alas position), Scarlet never got to taste those brownies.  By the time she said goodbye to Daddy and had returned to her room the brownies had been decimated by her roommates.

Fast-forward five years, and Scarlet has been a civilian for quite a while now.  She lives on a kibbutz about an hour’s drive from here and we’re going to visit her this evening.  While I was rearranging my baking drawer (doesn’t everyone have a baking drawer?) I found my very last bag of Reese’s chips.  And guess what’s now cooling before I cut it up into gooey, chocolately squares?

Before posting the recipe please let me get up on my soapbox and talk to you about vanilla.  I make my own vanilla.  How la-di-da does that sound?  But it is sooooo much better than the fake stuff they sell, and so much cheaper than the real stuff they sell.  I got my recipe from one of my foodie friends, Ruth.  Ruth was kind enough to share her recipe with me, and gave permission for me to spread the word to the masses (that would be you).  So check out Ruth’s Homemade Vanilla Extract on Recipezaar, you can thank me (and Ruth) later.

1 teaspoon vanilla (I just pour out a glug of vanilla)

One note about parchment paper:  the person who invented parchment paper deserves the Nobel Peace Prize for cooking.  You don’t need to grease the pan, and even better, after you’ve frozen the brownies you just take the paper by the edges (not delicately, grab those edges) and lift the whole thing out of the pan.  You barely have to clean the pan, a boon to those of us who love to cook but hate the clean up. 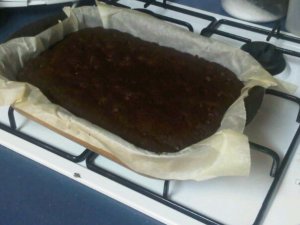 Hopefully this time Scarlet will have these babies all to herself.  She does have a roommate, Sasquatch (not because he’s big and hairy, because he’s got HUGE feet).  Maybe she’ll let him have a bite…