Win A Tallit Via A Mother In Israel

Another contest!  But this one isn’t mine, it’s being held over at A Mother in Israel.  The prize is a gorgeous tallit from Galillee Silks, a specialty silk designer located on Kibbutz Beit Haemek. 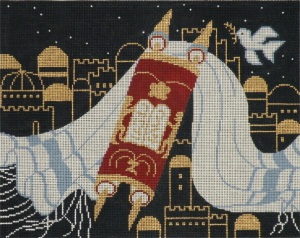 When Ju-Boy and I got married I bought him a tallit.  He wore it first under the chuppah and has worn it every single Shabbat and chag since we’ve been married.  I gave this to him as a wedding gift, together with a tallit bag that I embroidered over the months of our engagement.  The bag has held up well, but the tallit, well… the tallit has seen better days.  There’s just so many times you can dry clean the thing.  Chanuka is coming up and I think a new tallit would be a wonderful gift, especially since Ju-Boy’s birthday also falls on the night of the second candle.

So this contest has my name all over it, but if you think you stand a chance against the fates and believe this was meant to be yours, just click on the link to A Mother in Israel and then this tallit is just a tweet or blog post away.

Good luck to all of us!

The Story of Noah — Good Friends in High Places

We all know the story of Noah — it rains, people start getting wet, but the ark is warm and cozy and in the end Noah finds a nice spot, high and dry and don’t we all love a happy ending? 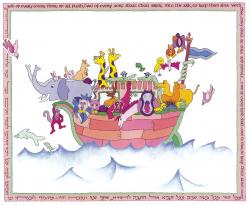 It was going to be a great Friday!  Ju-Boy and I were in the supermarket shopping for Shabbat when the heavens opened and the rain started coming down.  Everyone was smiling, rain is something we so desperately need here in Israel, and everyone loves the yoreh, the first rain of the season.  And how appropriate, since this was the Shabbat where we read Parshat Noach, the story of Noah.  Some of the checkout ladies started dancing in the parking lot, oblivious to the wet.  The guy who had fight with me at the cheese counter (he claims I cut in front of him, but how was I to know, he was standing in line at the meat counter at the time) smiled at me, and I smiled back.  Everyone here loves the first rain.  The weather hasn’t yet turned cold and after a long, hot summer, the first rain makes everyone happy.  Driving home while the drops pounded on the roof of the car, I watched the streets flood (in Ra’anana the streets flood even after a drizzle) and turned to Ju-Boy and said, “This is going to be a great Shabbat Noach!”  I couldn’t wait to get home and start braiding my challot and cook in my cozy house, filled with light and music and the smells of Shabbat coming out of my oven.

And then… boom!  Literally and figuratively.  A flash of lightning, the boom of thunder, and the lights flickered.  I quickly unplugged the computer and went back to braiding the challah.  Whew, that was close!  And then… boom!  And once again, I planned, God laughed, and the lights went out!  You could hear my scream all the way to Mount Ararat!  So the house darkened, the oven went cold, and we waited.  Then the lights flickered, our spirits were raised, and then, boom!  The lights went out again and the Miriyummy household entered the Middle Ages.  No electricity!  I had such plans for that electricity — I was going to bake challot, chickens, whip eggs whites and cream, even Ju-Boy was tenderly blow-torching a roast that was then going to get some oven time.  I quickly stuck my braided challah into the fridge and waited for the lights to come back on.  In the meantime, we started cooking on top of the stove (if you have an electric oven, you should have a gas hob).

We called the Electric Company and heard a recording that the power cut was massive — Ra’anana, Kfar Saba, Hod Hasharon, Herzliya, Ramat Hasharon, we were all in the dark.  We had some friends who still had electricity, some friends who were busy hunting for candles.  Remember Serene Shar and Peaceful Perry from Headless Chicken?  They had electricity and said we could use their oven.  I quickly drove my challot over, leaving Ju-Boy to deal with the rest of the cooking over the stove in the darkening house.  The Electric Company promised to reconnect us at 4 PM, and when that came and went I quickly drove home through the flooded streets (and no working stoplights!) to get the chickens and shove those in Shar’s oven.  Shabbat was coming faster than a tsunami of floodwater and that’s when Shar and Perry truly proved that they were foul-weather friends and issued an invitation to eat with them that Friday night, a mingling of food and friends, 17 of us around the table basking in the light of the house and the light of Shabbat.  By the time we returned home around 10 PM that evening the lights were on and the day had been saved.  Don’t we all love a happy ending?

Even before the thunder went boom and the lights went out I had decided that we were going to have a dessert straight out of the story of Noah — everyone needs a rainbow.

The recipe isn’t mine, it’s Shy-Boy’s, so he’s my guest chef this week.  One of the best things about this recipe?  No electricity needed! 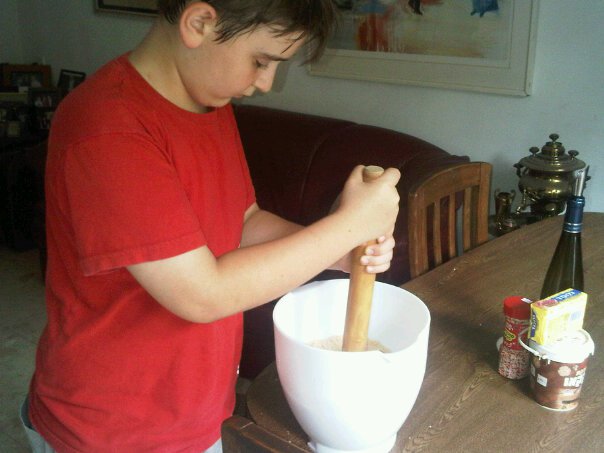 Crush the biscuits with a rolling pin. We normally use a food processor, but that's when we took electricity for granted.

Try to get a fine a crumb as possible. 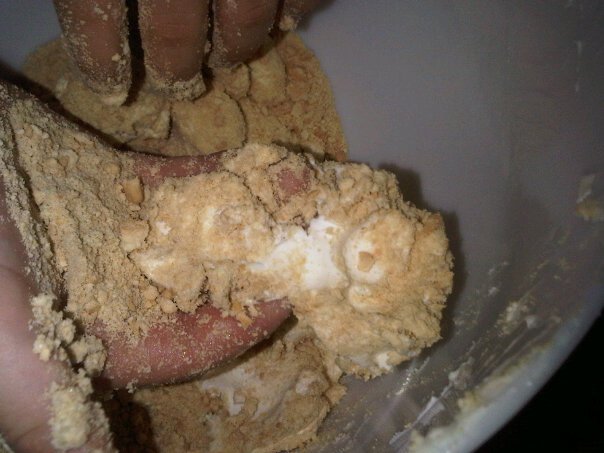 Work the margarine in with your fingers until well blended.

Add one cup of sugar. 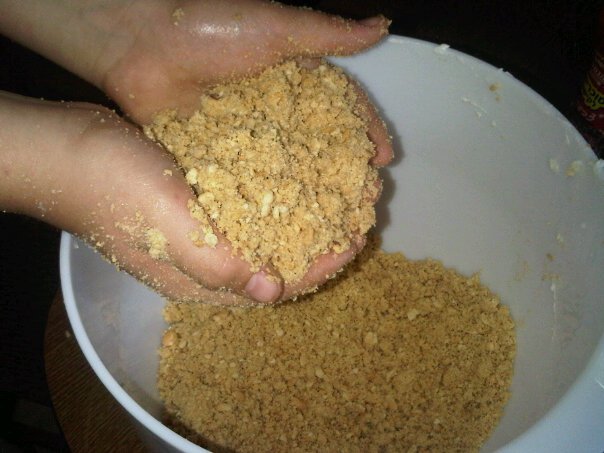 Blend well. The crumbs should have the texture of wet sand. 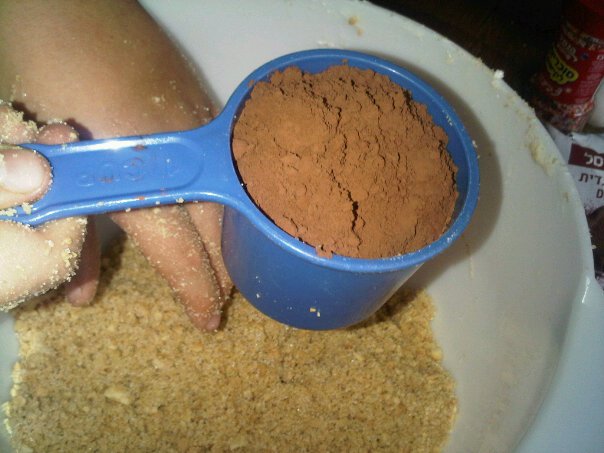 Add one cup of cocoa.

Blend well. The crumbs should have the texture of cocoa-colored wet sand. 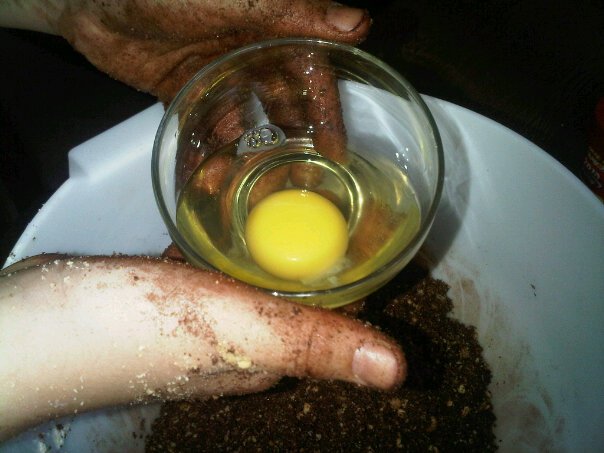 Add a few glugs of wine.

The crumbs should now have the texture of a stiff goop -- you know, you should be able to form balls that won't fall apart.

Get your paper casings ready. We started out with size #3 (pictured here) but quickly moved to a smaller #2.

You should form the balls with damp hands. Having a bowl of water nearby (or a faucet) is a huge help. 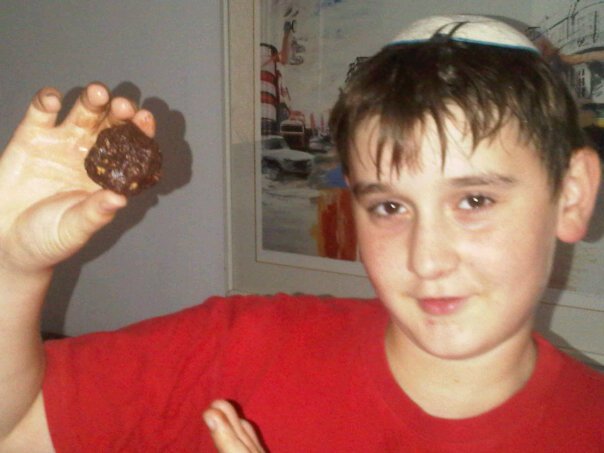 You should make the balls about yea-big, but in actuality, make them any size you like.

Roll the balls in the rainbow spinkles until coated. This was the only part of the recipe in which I got to help. Shy-Boy was busy making the balls, I was busy rolling them in the sprinkles, it was a real Lucy and Ethel moment for us. 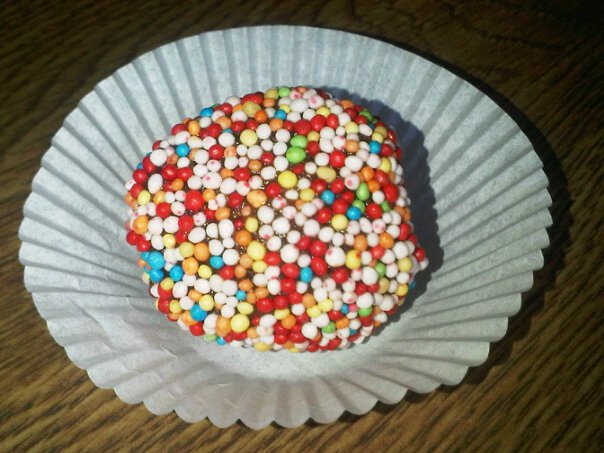 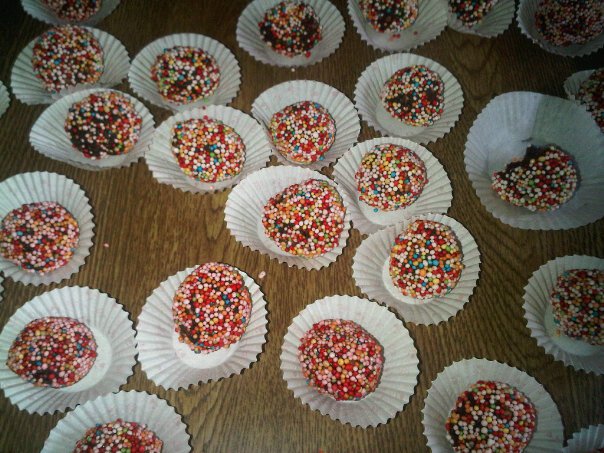 The recipe makes about 50 balls or so. Your mileage may vary depending on how big or small you make these babies...

Chill the balls in the refrigerator for at least an hour or so before serving.

We brought these to Shar and Perry’s house where they were a hit for dessert.  We brought them home to have with kiddush and for dessert for lunch the next day.  Keep them in a Tupperware in the fridge, handy for snacking, great with a cup of coffee, a bit of whisky, or just a colorful nosh on a rainy day.