He Was A Happy Dog 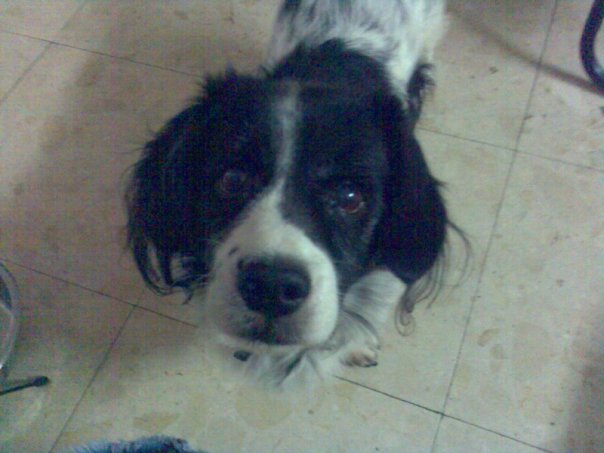 When your child is not well you want to do anything to make her feel better, to put a smile on her face.  And such was the case with Tinky.

Well… yes and no.

Tinky wasn’t really sick, she had an umbilical hernia.  An outie, not an innie.  While that really wasn’t the end of the world, the powers-that-be, our family doctor, decided that at the age of five it was time to give her a little tummy tuck.  And while this was supposed to be an easy, out-patient job, I was worried.  Of course I was worried, I’m her mother, it’s in my job description.  So I tried to assuage my own worries by bringing a smile to Tinky’s face, and the conversation went a bit like this:

Miriyummy:  Tinky, sweetie, you know you are going into the hospital to get your belly button tucked in.

M:  And when you come home, you can’t go to kindergarden for a few days, you have to stay home and lie down.

M:  So would you like a special toy to take into the hospital?

M:  I don’t think you can take a puppy into the hospital, how about a puppy doll?

M:  What about a brand new Barbie?

Okay, so we got a puppy.  And before you think I totally gave in to my little girl… okay, I did. 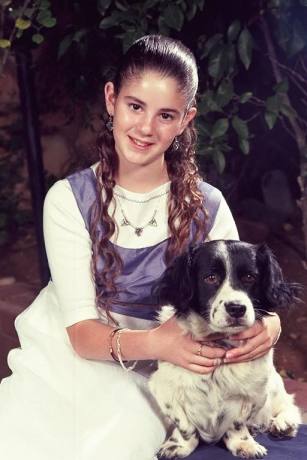 The Bat Mitzvah Picture: Tinky is 12, Shovav is 7

Shovav was the most amazing puppy.  He never barked.  Okay, maybe once or twice a month, on the average, he would bark at a cat he saw in the garden, but we were actually surprised to hear this sound come out of his mouth, and I think he was as well.  He was actually scared of cats.  He loved children, allowing them to do anything and everything to him.  It was a rare child that got a snarl out of him, usually a child that was just a little too tough on our eternal puppy.

We had a large garden where Shovav would roam, but he always managed to find an escape route to follow us when we left the house.  I used to go walking at 5 in the morning and about three minutes into my walk I would hear him scrambling behind me, his nails scratching at the asphalt of the road.  We would all go to the synagogue on Saturday morning and Shovav would show up for services about ten minutes later.  There wasn’t a single hachnasat sefer torah where Shovav didn’t lead the procession.

When I left the hills of Givat Ze’ev and moved to the bustle of Ra’anana, Shovav got a bit of a rude awakening.  It was in Ra’anana that Shovav became a dog.  Beforehand, as a friend said to me, he was a living, breathing stuffed animal.  But in Ra’anana Shovav was not allowed to roam the streets at will, he was no longer the Grand Marshall of the parade.  He had to be leashed when we took him out into the street, and there were too many cars for him to run free.  There were also too many cats.  My neighbor is one of those Cat Ladies, and her collection always gives Shovav the shivers, he just hated those cats, who blocked the driveway and laughed at him from the garden wall. 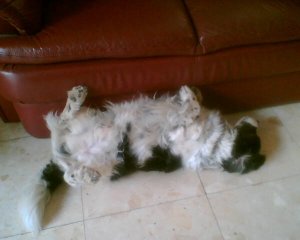 It was also in Ra’anana that Shovav acquired a step-brother, Ju-Boy’s dog Honey.  Shovav was happy for the companionship, but Honey wasn’t.  They developed a noisy detente.  Honey would bark at Shovav and Shovav would ignore Honey, which would just get him angrier, and make him bark even more.  Dogs will be dogs, but this wasn’t the most pleasant of experiences for the humans in the family, especially around the Shabbat table.  At a certain point it would escalate to actual doggie-wrestling.  In the beginning the lighter and more agile Honey always won, but then Shovav figured out that he just had to manage to get the upper paw and sit on Honey.  Honey would struggle, snarl and bark, and Shovav would just sit there, vapidly staring into space, until some signal would pass between the two that it was time to retreat to their separate corners.  Two years ago Honey reached the age of 17 and became very weak and unHoney-like.  He would wander throughout the house, absently barking at nothing, and Shovav knew to leave him alone.  When Honey died in January 2010 Shovav seems lost without his adversary for a few weeks, but then got used to eating alone, and became the sole pet in the Miriyummy household. 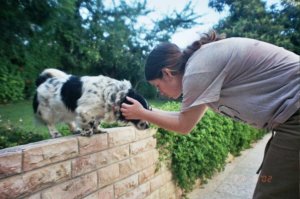 Shovav in his younger days, with Nomush, in the garden in Givat Ze'ev

It seemed that Shovav had been with us forever, that he was always part of our lives.  In the past year his health deteriorated.  Last October, just as I was cooking for Shy-Boy’s Bar Mitzvah lunch Shovav decided to take a running leap off the front steps of the house and came crashing down in the driveway.  He lay there unable to get up while my neighbor’s cats just sat there and laughed at him.  I had 30 people coming for lunch the next day, but I scooped him up and took him to the vet.  Dr. Alex Keller worked miracles on my eternal puppy.  Shovav had herniated two discs in his spine and was paralyzed from the “waist” down.  The vet stretched him back into place, gave him a sedative and sent him home with instructions to return the next evening.  Shovav slept through most of the next day, which was a blessing, since 30 people in the house would have overexcited him and not made for the best recuperative time.  Within three days, thanks to Dr. Alex, Shovav was as good as almost-new.

In the four months since then Shovav was my miracle dog.  Yes, he had a few issues with his spine, with his joints, and even with his kidneys.  But it was in the last month or so that we noticed he was getting senile.  Yes, there is such a thing as Senile Dog Syndrome, and Shovav had most, if not all, of the symptoms.  Finally, we came to one of the hardest decisions we have ever had to make.  I called Dr. Alex and discussed Shovav’s health.  At first I only talked about the physical problems, and Dr. Alex thought maybe with a little re-hydration and a shot or two we could up his quality of life.  But when I mentioned the SDS, the decision was made.  It was cruel to let a dog live like that, no matter how much of a cloudy haze their world becomes.  I let my girls know, tears flowed, it’s not an easy decision to make. 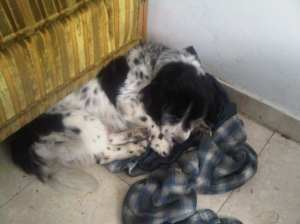 Shovav, napping on his last day

So two days ago, on Friday, we carried my 17 year old puppy into Dr. Alex’s clinic.  Our vet was amazing, both considerate of my dog and of my tears.  Shovav fell asleep in my arms and I cried my good-byes.  Ju-Boy stroked his step-dog farewell, and then Dr. Alex told him to take me home, before the lethal shot was given. Shovav, my dog who never barked, went quietly over the Rainbow Bridge.

It’s been a hard two days for us.  We keep coming downstairs in looking in the family room, expecting to see him snoozing on the flannel jacket that was his favorite bed.  Last night we returned home at midnight after having gone out to see a movie.  Normally, instead of falling exhausted into bed we would grumble about having to take the dog out for one final walk of the night.  Last night we sadly didn’t need to grumble. This morning it felt weird, not taking him for a walk before I went off to the office.

How long will this odd feeling last?  I don’t know.  My one consolation is, as I quote my Sassy, “He is in a better place now and we gave him the best life ever!! He was a happy dog…” 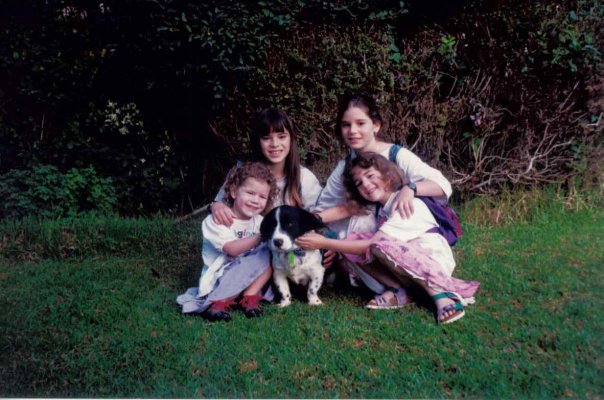